Precept #1:  A Place at the Economic Table for Each of Us. 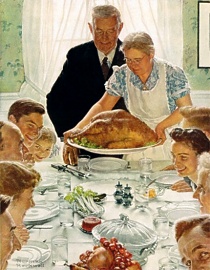 45 years, we’ve watched silently (like the proverbial frogs in the slowly heating kettle) as globalization, accelerating automation, and union decertifications have hollowed out the middle class and vastly enriched the very wealthy. It’s a reverse mirror image of the changes brought about by the New Deal which led to a vibrant middle class following World War II. Many of our families have been pushed away from the economic table. With the Great Recession, even fewer good-paying jobs were available, while expenses for health insurance, education, and transportation  increased. These are structural problems that are likely to get worse, unless we intervene. Can we employ progressive values to provide a secure and rewarding future for our children and grandchildren?

There’s a saying that a rising tide raises all ships. But for this to be meaningful, one first needs a ship! Many of us in the United States have been left underwater during the rising economic tide of the past 40 years. In his speech at Osawatomie, Kansas, on December 6, 2011, President Obama connected the dots and outlined the history of this profound redistribution of wealth from the middle class to the wealthy: the automation of many jobs, off-shoring good-paying jobs, the decline of labor unions, and the lowering of tax rates for the high-income folks. In this pivotal speech, he termed our current economic imbalance as, “…the defining issue of our time. This is a make-or-break moment for the middle class, and for all those who are fighting to get into the middle class.”

The economic disconnect we’ve experienced, the breaking of the basic bargain linking pay to productivity gains, is suggested by this graph from the book Presimetrics (see Resources), which compares our Gross Domestic Product (GDP) per person with the median earned wage. (Half of all wage-earners are above the median, and half are below.) A similar chart appears here.

Middle class wages, represented by the real median wage (adjusted for inflation), have barely grown, while the real total wealth per person (adjusted for inflation) has grown by 88%. There has been a great increase in productivity per person, but the worker has not benefited. As we will see below, most of that growth in real wealth has gone to the top 1% of the population. Here is a short video by Professor Robert Reich that quickly describes the situation and the effect it has on all of us. A more lengthy exploration by Paul Solman of the PBS NewsHour in his series on economic inequality is available here. And Pulitzer Prize-winning journalist Hedrick Smith outlines this history in a PBS NewsHour interview.

If middle-class wages had grown with the economy, it would not have been necessary to have two-income households in order to make ends meet. Yes, the second person could still have entered the workforce, but the family would then be living with ample security, instead of barely scraping by, in danger of bankruptcy from an illness or job loss. As it is, the middle class does not have the purchasing power to lift us out of the Great Recession.

The Collapse of the Middle Class

Job loss and wage stagnation have had a devastating effect on the middle class, which has resulted in two-income families barely holding their own, with increased spending on mortgages (especially if they have children they want to place in a good school district), health insurance, the second car, and child care. And those families are at increased risk of bankruptcy. When an unforeseen event such as serious illness, ever-more-likely job loss, or divorce occurs, families have no discretionary income or savings to fall back on.

There is an excellent video that describes the situation: “The Collapse of the Middle Class,” a lecture by Elizabeth Warren. Senator  Warren is the author of the 2004 book, The Two-Income Trap, on this same subject. Formerly a professor of law at Harvard Law School and Chair of the Congressional TARP Oversight Panel, and instigator of the new Consumer Financial Protection Bureau, she is now an active U.S. Senator from Massachusetts. She is an inspiring leader.

Bill Moyers has followed two American families for 20 years, as they have coped with the collapse of the middle class. A powerful and moving account of their struggle is contained in this FRONTLINE program the first aired on July 9, 2013.

On April 30, 2011, Sen. Bernie Sanders (I-VT) gave another strong speech describing in detail the way that inequality in wealth and income in the U.S.A. is affecting us. He then declared, “These are statistics not from a democracy, but from an oligarchy, and we have got to change that.”

To make things a little more personal and concrete, here is a link to a touching and compelling report by Paul Solman of the PBS NewsHour on one effect of the shrinking availability of jobs: systematic discrimination against the older job seeker. Given the choice an employer will choose the younger candidate, leaving many baby boomers out in the cold, and in some cases, destitute.

Life at the Top

Those with their hands on the economic levers are doing better every day. Right now, the wealthiest 1% control more than 23% of all income earned in America. The wealthiest 1% controls more than the bottom 50%. It’s not only that the rich are getting richer. The very, very rich are getting richer. In the last 25 years, we have seen 80 percent of all new income going to the top 1%.

The wealthy are not bad people, but they are subject to the basic human frailty that tells us we can never have too much money. They spent hundred of millions of dollars on the November elections to increase their political clout, and, in so doing, further impoverish the rest of us. A 2012 video by ITVS, titled “Why Poverty? Park Avenue: Money, Power & the American Dream describes life of the wealthy and the influence of money in politics. And here is a description of the modern plutocracy by Bill Moyers, compared with the “robber barons” of the 19th Century.

While life for most of us has become deeply problematic, here is a description and photos of what life looks like for the most wealthy among us.

As the article describes, the top 1% of Americans owns more than 90% of the rest of us combined. “In 2007, the latest year for which figures are available from the Federal Reserve Board, the richest 1% of U.S. households owned 33.8% of the nation’s private wealth. That’s more than the combined wealth of the bottom 90%.” Also, from the Working Group on Extreme Inequality, 400 people have as much wealth as half of our population. The combined net worth of the Forbes 400 wealthiest Americans in 2007: $1.5 trillion. The combined net worth of the poorest 50% of American households: $1.6 trillion.The top 1% also own 50.9% of all stocks, bonds, and mutual fund assets. The top 10% own 90.3%.

The 2007 documentary The One Percent by Jamie Johnson, heir to the Johnson & Johnson fortune, gives additional insight and commentary. His interviews with wealthy peers and associates gives a feel for their social isolation from the rest of us – an unhealthy detachment. In fact, in a follow-up article in 2008, Johnson reports that the very wealthy were welcoming the Great Recession, because it reduced the cost and increased the availability of some coveted status symbols.

In essence, the wealthy have much more money than they know what to do with. They want more, but only because of human fear of scarcity, not because they need it. If you watched the “60 Minutes” interview with Jerry Jones, owner of the Dallas Cowboys and worth $2 billion (that’s 2,000 million dollars), you heard him talk about that fear: “I run scared,” he said.

It seems reasonable for us to assume that the factors that led to the great inequality of wealth in this nation will continue for the foreseeable future. Will our economy keep stumbling along toward a distant recovery? How will that affect the 2020 election? Our federal government is divided and deadlocked with almost no middle ground. But, according to N.Y. Times Republican columnist David Brooks, true “survival of the fittest” at the human level depends on cooperation and collaboration. How will the impasse be resolved? Can a peaceful revolution of the voting public change the political dynamic? Perhaps the 2020 election results will be pivotal. It behoves us to move beyond stalemate toward some measure of economic justice.

We urge you to join with us and others to derive creative solutions that meet everyone’s needs.