Precept #2:  Everyone Pays Their Fair Share Toward the Common Good. 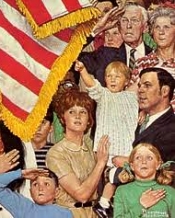 We’re all in this together. The “Occupy” Movement changed the debate from austerity and tax cuts to inequality and “the 99%” and taxing the wealthy more heavily.

Tax rates are at historic lows. At a time of burgeoning budget deficits, and vast inequality of wealth, we need to take a closer look at the revenue side of the budget equation.

In his speech at Osawatomie, Kansas, on December 6, 2011, President Obama outlined the 35-year history of the profound redistribution of wealth from the middle class to the wealthy: the automation of many jobs, off-shoring good-paying jobs, the decline of labor unions, and the lowering of tax rates for high-income folks. And he termed our current economic imbalance as, “…the defining issue of our time. This is a make-or-break moment for the middle class, and for all those who are fighting to get into the middle class.”

This issue should be at the heart of our budget deliberations and of the 2020 election debates. The plug has been pulled on the middle class. It’s been drained of its economic power over the past 45 years. The money is now with the elite few at the top. Government programs are needed just to keep the middle class afloat. This is the justification for bold and significant tax increases on the wealthy.

As soon as the subject of raising taxes comes up, the question of impact on the economy

arises. Will increasing taxes slow down economic activity? The reverse side of this question is whether cutting taxes will stimulate the economy. This involves the “supply side” or “trickle-down” theory that giving the wealthy more money will cause them to invest more in the economy, thus producing a net increase in tax revenue. The cartoon at the right suggests that it is consumer demand that actually stimulates economic growth.

This pie chart shows that individual income taxes and payroll taxes are the source of about 81% of U.S. tax revenue. (A chart showing more detail and including state and local revenue may be found on our 2011 Government Budgets page.)

For useful background, the Tax Policy Center presents a chart and discussion on effective federal tax rates for the range of U.S, income groups for 2008. This chart includes income taxes and payroll taxes. (It should be noted that it also includes business taxes for some tax payers, which inflates the displayed total tax rates for the top 1% income group.)

An even more interesting, detailed breakout in Excel format may be found here. It allows us to remove the business tax influence and see that the top 1% pay about a 19% effective federal tax rate.

And we can then go further and apply those tax rates to the total U.S. individual income for 2010 to derive the dollar amounts involved. These calculations are shown in this Excel chart (or in .pdf format), which shows that the top 1% paid about $450 billion in individual income taxes for 2010 (column highlighted in yellow). If top income tax rates were, say, doubled, an additional $400 billion or so in federal revenue would be realized. And we have the ability to do additional analysis to estimate the effect of raising the tax rates on capital gains and dividends (see below).

The Case for Raising Taxes on the Wealthy

We believe it is entirely appropriate to explore and evaluate increased taxes on the wealthy as a major element of a progressive plan for our economic future. The strategy here is to “free up” the wealth that now lies dormant and idle in the hands of the wealthy (as described here), and recycle it to invigorate the economy and enhance everyone’s well being. (We look at the question of property rights and moral righteousness on our Taxation and Property Rights page.)

Here is a chart showing historical federal income tax rates for the lowest and highest income earners. As you can see, the top marginal rate, currently at 35% following the Bush tax cuts, is currently quite low, compared to historical top rates, which have been over 70% as recently as 1983. 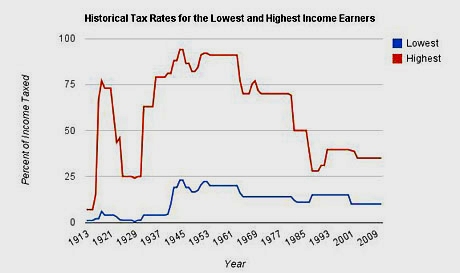 The above chart does not depict taxes on capital gains and dividends. (Nor does it reflect payroll taxes on wages.) Currently, capital gains and dividends are not taxed as regular income. They are taxed at the flat rate of 15%. For wealthy people, capital gains and dividends are about 64% of their total income. As a result, the total federal tax they pay equals only about 17 percent to 20 percent of their adjusted gross income. Warren Buffett, one of our wealthiest fellow citizens, stated that he only paid 19% of his $48 million income for 2006 in total federal taxes (since much of his income was from dividends & capital gains), while his employees paid 33% of their income in federal taxes, despite making much less money. “How can this be fair?” Buffet asked, regarding how little he pays in taxes compared to his employees. “How can this be right?” he addeed.

The Congressional Progressive Caucus, representing about 83 members of Congress, put forth an annual budget that is much, much different from the Republicans’ — and even different from the Administration’s. It’s comprehensive, addressing a number of key issues. It projects a balanced budget by 2021, while the Republican plan projects budget deficits into the indefinite future..

Called “The People’s Budget,” the CPC plan increases taxes on the wealthy, though not nearly to the level of historic rates.

The above discussion does not focus on payroll taxes, which are about 36% of the U.S. tax revenue, and are a major portion of the total taxes paid by most of us. They should be kept in mind in any discussion on tax policy.

Nor does the above discussion cover estate taxes, which Warren Buffett also favors for fairness, but which are disparaged by many of the wealthy as “the death tax.” Buffett says, “There’s class warfare, all right, but it’s my class, the rich class, that’s making war, and we’re winning.” (According to the compromise tax law enacted in December, 2010, estates valued at $5 million or less are exempt from the tax. Estates worth more than $5 million are taxed at a 35 percent rate.)

It might also be mentioned that some countries tax accumulated wealth. The wealth tax is like a property tax: it goes on year after year, based not on your income, but what you own. It is not applied to small amounts of wealth, but can bring in substantial revenue when applied to the very wealthy.