Our immediate focus is on solving the widespread poverty now submerging the hopes of many Americans. We see wealth inequality alongside global warming as the two determinant issues of our time and of our nation’s future.

Poverty breeds stress and suffering, resentment, despair, and fear which have led to the dangerously ignorant and unbalanced Trump presidency.  If poverty is not addressed in a meaningful way, the suffering will continue, and future elections (or even rioting in the streets) could produce even more dire outcomes, further delaying action on global warming.

Pervasive, increasing poverty has been caused by job loss from computer automation and off-shoring over the past 45 years.  The median wage has been stagnant, as bargaining power has been lost, causing a shift of our national wealth from the working class to those at the very top. We have not responded effectively, and have not righted our economic ship, which is top-heavy and listing badly. We need truly responsive policies for the future, policies that free us from fear and contribute to the common good for all.

We are deeply moved by the spirit of our national motto: “E pluribus unum ” — “Out of many, one.” We’re all in this together, and together we can prevail, if we first ask our heart of hearts what kind of nation we really want.

Here is our future:

Here is our economic and social foundation: Capitalism, while imperfect, is the best known mechanism for wealth creation. However, unregulated market forces can produce vast inequality and other negative consequences. We believe that our government of, by, and for the people, while also imperfect, has a central role in using the common wealth for the common good in a balanced economy.

Below, you’ll find two suggested precepts relating to our current economic dilemma. (Elsewhere, you’ll find interrelated subject areas that also deserve investigation and discussion.) Please join us in a much-needed dialogue on how to set things right for us all.

Precept #1:  A Place at the Economic Table for Each of Us. 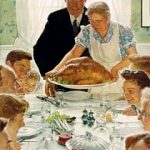 During the past 45 years, we’ve watched silently (like the proverbial frogs in the slowly heating kettle) as globalization, accelerating automation, and union decertification have frozen wages, hollowed out the middle class, and vastly enriched the very wealthy. We propose significant wage supplements or a Universal Basic Income to straighten out our economy in a way that benefits all….. (Read more.)

Precept #2:  Everyone Pays Their Fair Share Toward the Common Good.

We’re all in this together. We propose sharply higher taxes on the wealthy. Tax rates are near historic lows. During the 1950’s and 1960’s our top marginal federal income tax rate was 92%, compared to today’s 37%. Meanwhile, the share of national income going to the top one percent has increased from 10% to 20%, equal to about $1.5 trillion more per year. At a time of burgeoning budget deficits, and vast inequality of wealth, we need to take a close look at the revenue side of the budget equation. (Read more.)